Joe Leach is a straight up legend of a human being.  He is currently approaching the halfway point of a 2,500 mile marine litterpick whilst he attempts to break the record for the fastest solo unsupported circumnavigation of mainland Britain. 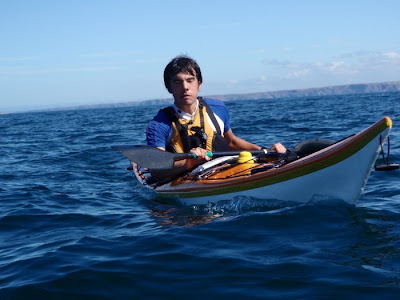 Joe set off from Falmouth, Cornwall just before 7.30am on May 2nd and paddled around the Lizard Peninsula and Land's End on day one.  Any of you who are familiar with the Cornish coast will get an idea of just what a big challenge Joe has taken on and the sort of top-rate paddler that he is to be able to take on even just the first day of what is expected to be an eighty day marathon.  On day two he came out of the gates just as hard and made it from the far south-west of the county up to Polzeath, a distance of 45 nautical miles (50 "normal" miles) which is massive for a single hit.

My housemate Matt stood on the wet sand at the water's edge in the dark and flashed his headtorch across the bay towards Stepper Point.  Way off in the distance, just outside the black shadow of the headland came a series of flashes in response.  Joe hauled up on the beach just after 10pm and dropped his daily catch of 3 pieces of marine litter into our bin then ate a mackerel the size of a small whale and a lot of brown rice and crashed out on our sofa for the night. The next morning he got up at 6am and carried on to Lundy Island. 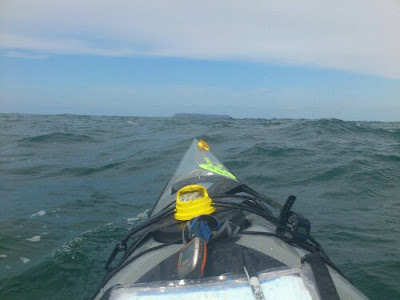 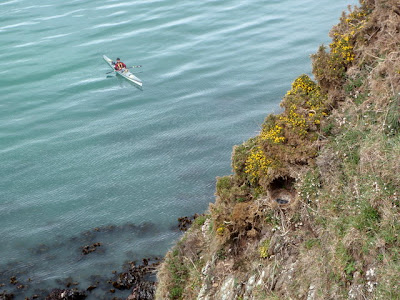 And he's kept on pushing.  Every day he scoops three pieces of litter out of the seas around the British coast (pick-up 3) and paddles hard.  He's had favourable weather and not so favourable weather, and taken on some massive open water crossings to his home on the Isle of Man (40nm) and then on to the coast of Ireland.  Right now he's about to round Cape Wrath and turn East along the North coast of Scotland towards his theoretical half way point of John O'Groats.

Joe is updating his blog with progress reports and photos on an (almost) daily basis and tweeting from his kayak via his mobile phone which he's carrying in a waterproof case.  Follow how he's getting on here or find him on twitter @joearoundbritain. 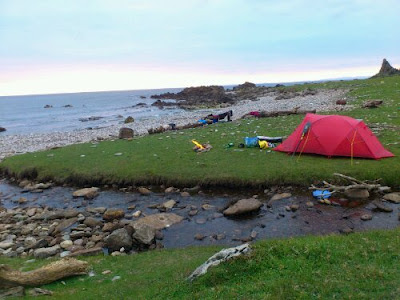 With camping spots like this Joe is fast collecting an amazing set of memories of places around the coast of our island that not many people will get to enjoy.


Joe is aiming to raise the modest sum of £1000 for Surfers Against Sewage.  You can donate here or through his website.  Not only is he taking on an unimaginable challenge for which donations will help to drive him on through the tough moments, but he's providing a service and personally removing around 240 pieces of litter from the sea.  Feel free to dig deep the best way you can, just as Joe's digging deep the best way he knows how.

View Joe Round Britain in a larger map
Posted by mat at 9:39 PM