Black Swan; Behind The Curtain 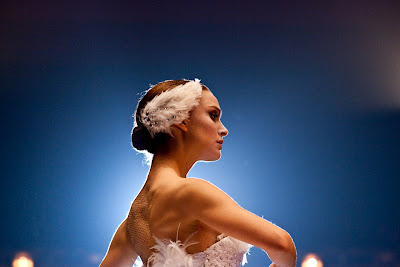 Natalie Portman as the White Swan
It's Oscars weekend, and Darren Aronofsky's dark psychological ballet thriller Black Swan and it's cast and crew are up near the front of the pack, in line for a clutch of little golden statues tonight including Best Picture, Best Director, Actress in a Leading Role, Best Cinematography and Best Editing.
My oldest friend since way back when, a certain Mr Alex Wilson, worked as the Producer's Assistant on the movie and I've been hassling him since October to write a guest blog post. He did, and sent across a whole stack of shots from the Director of Photography and on-set photographer to back up his words. Over to him for the stories from behind the curtain: 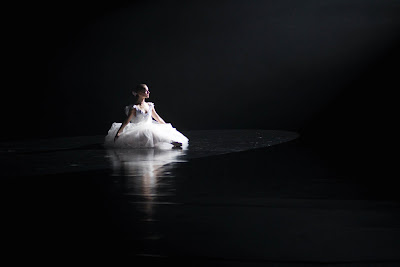 Spotlit
When I tell people I worked on Darren Aronofsky’s Black Swan, almost without fail the first question is ‘What is Natalie Portman like?” My response? “Dedicated”. 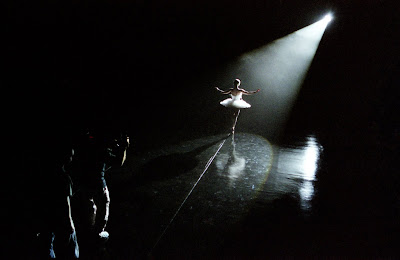 There has been a certain level of criticism leveled at the film and at Natalie from the ballet world for not starring a real life ballerina. This is almost not worth responding to, and all you need to do is witness Natalie’s performance and her well earned Golden Globe and Oscar nominations to vanquish any doubts that she was the right choice. 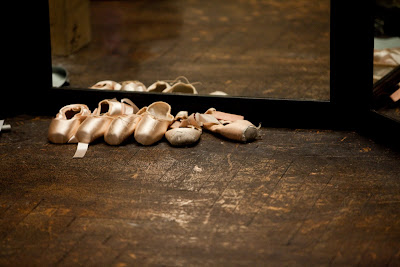 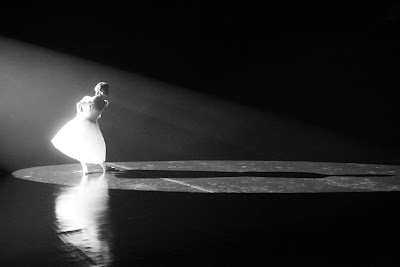 Circle of light
A ballet dancer in her youth, she had the core skills and worked herself into the ground for months and months to re-shape herself into a ballerina. The girl did not stop. In fact there is a physiotherapy scene in the movie where she is having a quite graphic rib examination. This was not acted. Darren asked the physio if he could film Natalie, not her character Nina, being assessed for an actual injury she received during filming when she was lifted awkwardly. This not only demonstrates the rigours she went though, but highlights what I found to be the most fascinating element of being involved with this film; the techniques Darren Aronofsky uses on his cast. 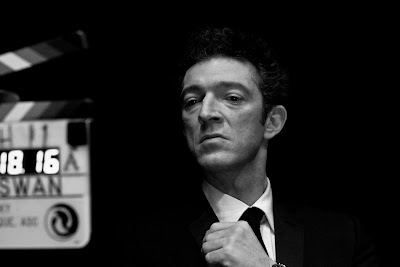 The aforementioned physio scene is just one of several real life scenarios that Darren just let exist, evolve and left the camera to capture it. He had used similar techniques in his previous film ‘The Wrestler’, notably Mickey Rourke engaging with real customers when working behind the deli counter. 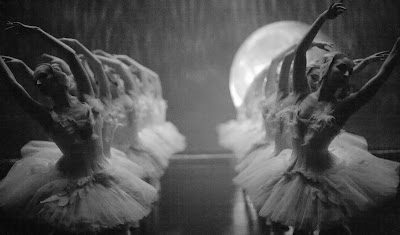 Choreography
Black Swan was a film with an A-list cast, often shot like a guerilla student film. My fondest memory being one long night spent running around the New York City subway system with Natalie Portman, Mila Kunis, a handheld camera and no filming permit into the wee hours of the morning; risky, but the kind of thing that makes independent films so gritty and realistic. 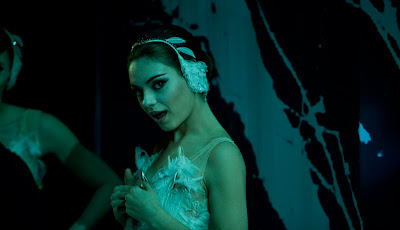 Most films with a nightclub scene do not ring true. The extras are normally dancing to no music, the dance floor is rarely full enough and those that do populate it are impossibly beautiful. What was achieved in Black Swan, in my opinion, is the best club scene committed to film. How was this done? By creating a real club, in a club, with real music, and real clubbers…at 8am on a Tuesday morning. A one off Chemical Bothers remix using samples from Swan Lake is the music used in the scene, giving it a nice twist for those in the know. 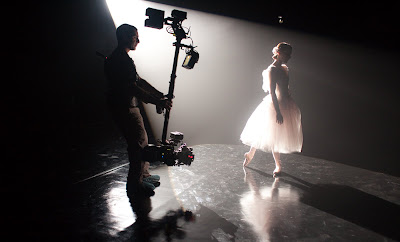 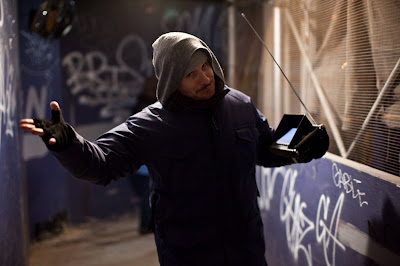 Darren Aronofsky on location in New York, on what Alex described as "the coldest night of my life"

My last on-set anecdote is the most awkward, but also the most genius: We had worked through until 3am after a long day of filming and Natalie was asked to act out a traumatic and emotional scene for the twentieth take in a cramped bathroom. Nico, the official photographer was snapping away in the corner of the room until Natalie in no uncertain terms requested he leave the room since he was getting on her nerves. This of course is completely fair, and just like anyone else would be in her position, she was frustrated and in need of a release. As Nico left the room, Darren saw an opportunity and sent him straight back in, stood him in the corner and told him to start snapping away again. This had the effect of pushing Natalie over the edge of frustration and emotion; and Darren got his shot. To this day we are unsure whether this was a masterstroke to evoke performance or just to wind up his star. 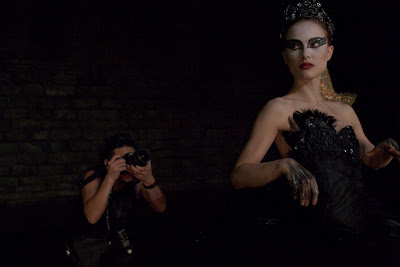 Portman as the Black Swan, close to the edge?

Black Swan is a beautiful, visceral, dark and intense experience to watch and I hope that you get the opportunity to go and see it. Look out for my shoulders in the subway scene. A cameo sure, but I feel that I really contributed to the scene… 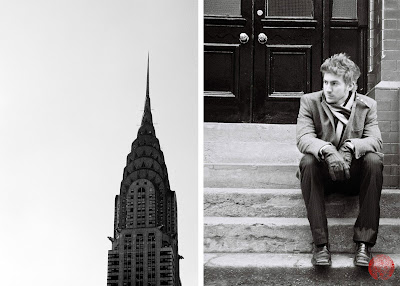 The Chrysler Building, NYC, and Alex Wilson, Producer's Assistant and the author of this post.
Thanks for the inside line mate and enjoy the parties tonight, I hope you guys bring home some statues for all of your hard work.
All images are used with the kind permission of the copyright holders, Protozoa Pictures and photographers Ray Lewis and Nico Tavernise.
Posted by mat at 5:22 PM 9 comments:

Sometimes the best plan is to have no plan.
At the tail end of 2010 my old friend Kyle and I tried to plan a surf trip to see in the New Year with a few warmer waves. Almost every option we looked at turned into a dead end and with two weeks to go until our planned departure date I drew a circle on a map with a 6 hour flight radius to see just where we could go. After researching all of our options, most of which turned out to have four-figure price tags, we flipped a coin between Sardinia (the mediterranean island off Italy) and the Algarve coast of Portugal. The Algarve won so we booked the cheapest flight that we could find (not so cheap because of the time of year) and organised what we thought would be a beater of a hire car judging by the cost. There was barely any coin left in our budget. 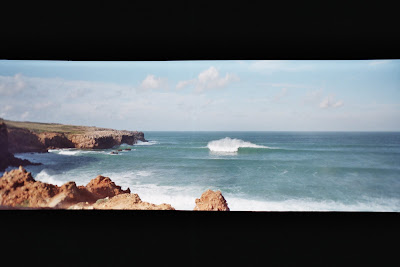 After a tortuous six-week flat spell, the Atlantic coast of Europe woke up on Boxing Day growling... 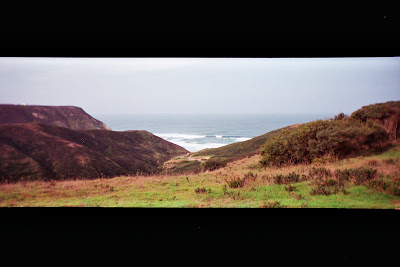 So much so that the banks at nearly every west facing beach were immediately washed away. We spent the first few days clocking up the miles looking in every nook and cranny down every dirt track leading to the coast and surfing coves that were just cauldrons of churning whitewater. Big drops and one-turn-wonders on waves that were barely more than glorified closeouts. We paddled ALOT. 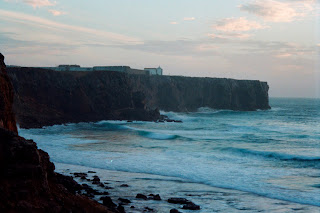 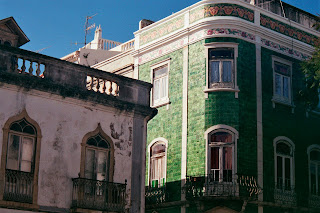 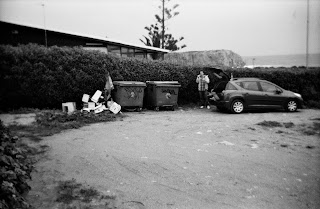 Budgetary requirements resulted in our rental car becoming our accomodation. Old hands at this from the combined experience of many trips on many continents, we have found that sleeping next to the bins behind restaurants is a sure fire way of making friends with local dogs on the scrounge for scraps, but also (and most importantly) of avoiding being moved on by the cops. They don't expect crew to camp here for obvious reasons so focus their attentions on waking up and shifting all the camper vans in the beach car parks. 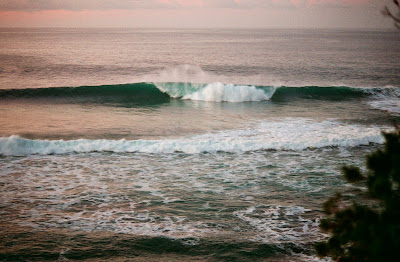 The joy of the Algarve is that it's the most South Westerly tip of the Iberian Peninsula so when the swell gets massive and the wind comes from the North (as it did over the 2010/2011 transition) the swell wraps right around onto the South Coast. There are some incredible right-hand point breaks along here nestled under the cliffs. We scored this joint solo for an evening before word obviously got out the next day. Overhead and wedging, this made it worth sleeping in a car and eating sandwiches for a week without a doubt. 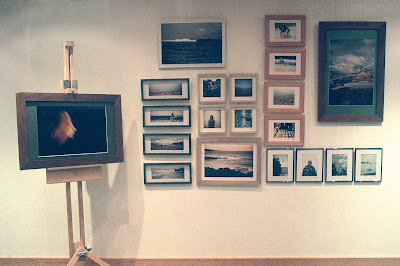 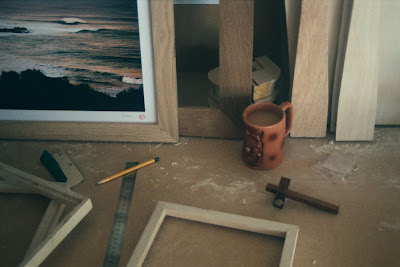 My workbench down in the pit. Various picture frames made from reclaimed oak floorboards, salvaged iroko from old school science desks, plywood off-cuts and some leftover ash from my current big-build project. Waste not want not. 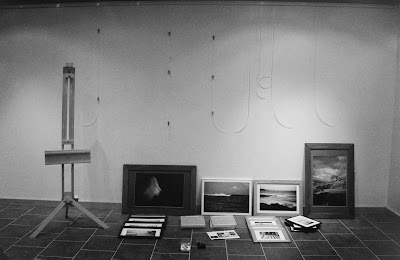 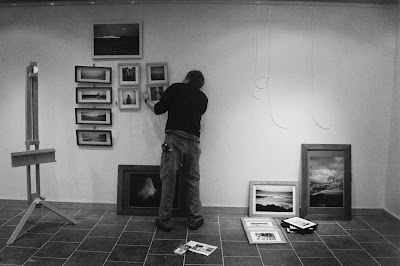 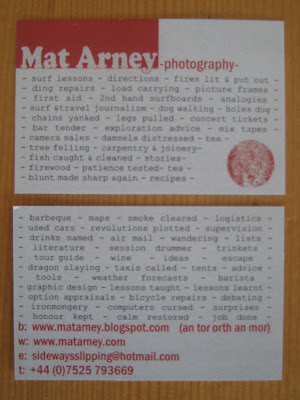 Because what I do to earn a living and what I actually do are many different things.
And I struggle to take myself seriously sometimes.
I try my best to use my time productively. These images are the result of a few of the things I've been working on through 2011 so far, in between making the most of the good waves we've been getting here in Cornwall. Fingers crossed I can keep the momentum going and this'll just be the start. There're a few exhibitions in the pipeline, www.matarney.com is due an update, I've got some interesting trips planned, some stories half written and there's a pretty ambitious build project going on down in the pit which I'll lift the lid on fairly soon. Keep 'em peeled hey.
P.S. The business cards are 18% grey on purpose, so all you shutter-bugs can light-meter off them if you need to. For digi-clickers, it's the tone that the processor in your camera takes as average and works out all of the other colours from. Now you know.
Posted by mat at 1:15 PM No comments:

Jeff Johnson: Inspiration to get out there and do stuff. 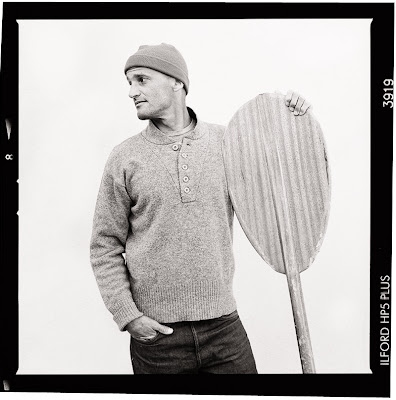 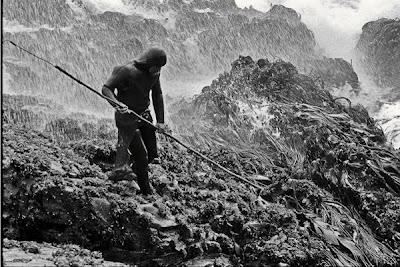 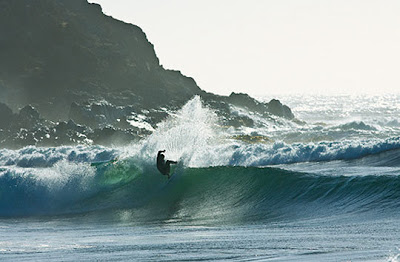 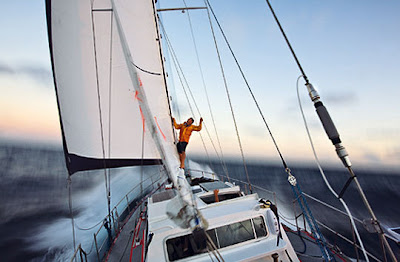 Before the mast fell off. Jeff Johnson. 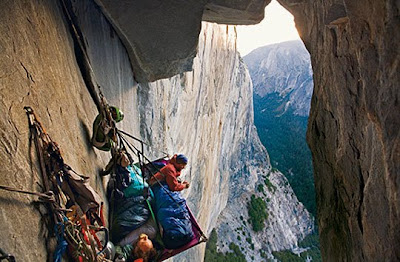 Porta-ledge bivvy on El Cap, Yosemite Valley, California.
Jeff Johnson.
For the past couple of years, every time I checked Jeff Johnson's website all it had was a single image of the front cover of one of his books and the words "new website coming soon".
Soon has become now, it's up there and is well worth the wait. He's timed it nicely to coincide with the release and hype of his latest film/book project 180 South, and it's crammed full of inspiring images from his various projects. He describes himself as an "everyman" but here's the lowdown: Surfer, climber, photographer, story-teller, on/off Patagonia employee, traveller and do-er of interesting things.
He's best known for his friendship and work with the Malloy brothers, surfing and taking them climbing ever since they lived together on the North Shore of Oahu. Whilst the three brothers were sponsored surfers being flown off on various trips across the globe, Jeff worked as a lifeguard and did "fireman" shifts as a flight attendant to facilitate his lifestyle. Check Bend to Baja, a bio-fuel powered surfing and climbing road-trip, their explorative outrigger canoe trips, sailing, climbing...the list goes on. It's inspiring.
Posted by mat at 7:02 PM No comments: